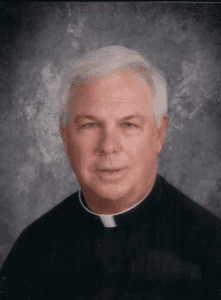 Monsignor Edward Ryan was born and raised in Our Lady Queen of Martyrs Parish, Forest Hills. After graduating from OLQM School in 1959, he went on to Cathedral College of the Immaculate Conception, Brooklyn. He later studied at Immaculate Conception Seminary, Huntington from which he earned the degree of Master of Divinity. Bishop Francis Mugavero ordained Msgr. Ryan to the priesthood at St. James Cathedral Basilica in May 1971 and assigned him as parochial vicar to the parish of St. Elizabeth, Woodhaven/Ozone Park. In 1981 Msgr. Ryan came to St. Gregory’s as parochial vicar; and ten years later he returned to St. Elizabeth Parish as pastor. In 1997 Bishop Thomas Daly appointed Msgr. Ryan to a four-year term as Episcopal Vicar of the Queens North Vicariate. After a brief sabbatical in Rome, Msgr. Ryan became pastor of Our Lady of the Miraculous Medal Parish, Ridgewood in 2002. He returned to St. Gregory’s as Administrator on June 30, 2012.
Monsignor Ryan earned a Master of Science degree in Pastoral Counseling from Iona College in 1982. From 1979 to 1985 he was an assistant counselor at the Religious Consultation Center in Brooklyn.
An avid railfan and local history enthusiast, Msgr. Ryan is a member of the Queens, N.Y. and Chatham, Ct. Historical Societies. While pastor of St. Elizabeth Msgr. Ryan conducted walking tours of Old Woodhaven on behalf of the Woodhaven Cultural and Historical Association.