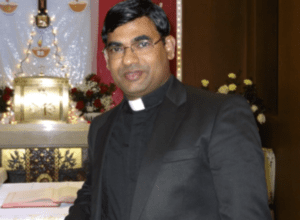 Rev. Johnson Nedungadan was born in Kerala as the third of six children of Anthony and Anna. He was ordained a Roman Catholic Priest on December 30, 1991.

After ordination, he has served as a missionary in different States of India. Also, he has served as a pioneer missionary in Tanzania, East Africa, for six years as the Pastor of one of the parishes in the Diocese of Mbinga, besides working as the Dean. He has also served as the Superior and Rector of both the Minor and Major seminaries of the South Indian Province of the Vincentians. And for the last thirteen years Fr. Johnson has been serving as Parochial Vicar of St. Gregory the Great Parish in Bellerose.