In the liturgy of the Mass, we express our faith in the real presence of Christ under the species of bread and wine by, among other ways, genuflecting or bowing deeply as a sign of adoration of the Lord. “The Catholic Church has always offered and still offers to the sacrament of the Eucharist the cult of adoration, not only during Mass, but also outside of it, reserving the consecrated hosts with the utmost care, exposing them to the solemn veneration of the faithful, and carrying them in procession.”

The tabernacle was first intended for the reservation of the Eucharist in a worthy place so that it could be brought to the sick and those absent outside of Mass. As faith in the real presence of Christ in his Eucharist deepened, the Church became conscious of the meaning of silent adoration of the Lord present under the Eucharistic species. It is for this reason that the tabernacle should be located in an especially worthy place in the church and should be constructed in such a way that it emphasizes and manifests the truth of the real presence of Christ in the Blessed Sacrament.

It is highly fitting that Christ should have wanted to remain present to his Church in this unique way. Since Christ was about to take his departure from his own in his visible form, he wanted to give us his sacramental presence; since he was about to offer Himself on the cross to save us, he wanted us to have the memorial of the love with which he loved us “to the end,” even to the giving of his life. In his Eucharistic presence, he remains mysteriously in our midst as the one who loved us and gave himself up for us, and he remains under signs that express and communicate this love: The Church and the world have a great need for Eucharistic worship. Jesus awaits us in this sacrament of love. Let us not refuse the time to go to meet him in adoration, in contemplation full of faith, and open to making amends for the serious offenses and crimes of the world. Let our adoration never cease. – Catechism of the Catholic Church 1378-1380 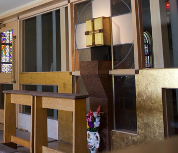 Adoration takes place on Tuesdays following the 9 AM Mass until 10:30 AM.

Adoration takes place on the First Friday of the month following the 9 AM Mass until 10:30 AM.

The Adoration Chapel is open from until 5 PM on weekdays and 6 PM on weekends. It may be accessed on 88th Road.

The Miraculous Medal Novena is prayed on Mondays following the 9 AM Mass.

Other Devotions as announced.